Parallels has announced the availability of Parallels Automation for Cloud Infrastructure (PACI), a fully-scalable solution for service providers to deliver cloud infrastructure as a service (IaaS) to small and medium businesses (SMBs).

PACI is a complete, turn-key cloud infrastructure solution and provides total hosting control, from provisioning and billing to self-service management and security.

Parallels Automation for Cloud Infrastructure is ready-to-deploy on any hardware platform, and also provides an integrated management panel that enables IT professionals to create, scale and manage Cloud-hosted infrastructure, virtual datacenters and Software-as-a-Service (SaaS) applications.

Parallels Automation for Microsoft Services and the enablement tools for ISVs will help Microsoft independent software vendors (ISVs) profit from the cloud.

To allow for efficient integrated delivery of cloud services based on Microsoft technologies with other complementary offerings, Parallels Automation for Microsoft Services (PA 5.2) enables service providers of all sizes to profit from the Cloud by automating delivery of the most complete set of cloud services, including Office 365 Syndication, Hyper-V Cloud, Exchange Server 2010 SP1, and SharePoint Foundation 2010.

With Parallels Automation for Microsoft Services, service providers will be able to resell Microsoft offerings and increase the average revenue per user. With support for the n-tier resell business model, Parallels Automation allows system integrators and VARs to extend the range of cloud services without investment in infrastructure.

Parallels is now deployed with 10 Cloud Service Providers in Americas, Europe and Asia offering reseller services to the Microsoft VAR and SI community.

Parallels today announced the launch of Parallels Transporter on the Mac App Store, an app that makes the move from a Windows PC to a Mac easy by automatically transferring music, pictures, Internet bookmarks, documents and more.

Parallels has shipped more than three million copies of its Parallels Desktop for Mac software. The Parallels Transporter app is designed for Mac users who may not need to run Windows on their Mac at all; it is a simple way to bring everything you need from your PC together on your Mac.

In addition to moving pictures, music and documents from a PC to corresponding Mac folders, Parallels Transporter also moves Windows programs and other files into a virtual machine on your Mac in case they are needed. Customers who later decide they want to run Microsoft Windows and Mac operating systems and applications simultaneously on their Mac can purchase and download Parallels Desktop 6 for Mac.

Parallels Transporter is available for download from the Mac App Store for limited time offer of $0.99, a $39 savings off of the $39.99 standard retail price. 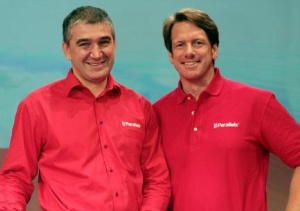 Parallels has announced the promotion to CEO of current company President Birger Steen.

Parallels founder and outgoing CEO Serguei Beloussov will continue his full-time role as Executive Chairman of the Board and Chief Architect driving the company’s strategy and innovation.

Steen has been charged with managing and accelerating the growth Parallels has experienced in recent years. The profitable company generates more than $100 million in revenue.

Steen joined Parallels from Microsoft in September 2010. Since joining the company, Steen has overseen sales, marketing, product management, and customer support and services. He has also been integral in working with Beloussov to prepare the company for its next stage of growth.

As company president, Steen oversaw the launch of Parallels Desktop 6 for Mac and Parallels Plesk Panel 10.

In his expanded role, Steen will also be responsible for all day-to-day execution including engineering sales, partner relationships, support, marketing and deployment services.

Steen will work to further the company’s leadership in Cloud services enablement and desktop virtualization, where it has 78 percent market share according to NPD Group.

Before Microsoft, Steen was CEO of Scandinavia Online AB, which was listed on the Stockholm and Oslo Stock Exchanges in 2000 under his leadership. Birger holds a Master of Science in Computer Science and Industrial Engineering from the Norwegian Institute of Technology in Trondheim and earned his MBA from INSEAD in France.

Parallels is launching and supporting:

Parallels today announced its official arrival in the Australian and New Zealand market launching its go-to-market strategy for its award-winning virtualization and automation software for business, consumer and cloud/service provider audiences.

With the announcement of its new office comes the appointment of two industry veterans, Neil Morarji as General Manager and Alexei Anisimov as Sales Engineer.

Neil will be responsible for driving Parallels’ strong relationship with its cloud services provider partners and two ANZ distributors, Conexus and Software Only, while Alexei will concentrate on providing strategic sales and technical support for customers and partners in ANZ.

Parallels has had a growing presence in Australia and New Zealand through its service provider partners, distributors and retail partners since 2006 and has gained a formidable reputation among businesses, consumers and service providers looking for virtualization and automation solutions that are among the fastest growing in the market.